You are here: Home / Artefacts

Making artefacts, vestments and books was a key element of the preparatory stages of the project, part of both investigation and realisation. They were required for use in the rituals, especially at St Teilo’s Church; but we learnt so much more about their significance, about the crafts and skills employed in their manufacture, and their meaning as sacred objects in the process.

There are four ways in which you can explore these objects and their place in the project.

• You can view the first of the introductory videos to the project – Making: Artefacts, organ and vestments , in which John Harper introduces most of the principal objects and talks about their use.
• You can click on a link in the Supporting Documents panel to open a pdf document with an image of an object and a narrative about investigating, making and using it.
• You can also click on the short description of each object further below in order to open a gallery of still images.
• Finally, you can read about the process of researching, making and using the objects in the project section of the website.

Short descriptions of the principal artefacts and vestments, with links to the gallery of still images: 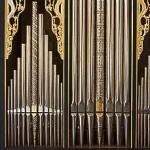 Late medieval organs in Britain were generally quite small, and a church often had two or three for services in different parts of the building. None survives complete; indeed just three key archaeological remains provide the main indigenous source of information about their nature and manufacture: two soundboards (wind chests) from Wetheringsett and Wingfield in Suffolk, and an organ case (now restored) in Old Radnor Church, Powys. This new medieval organ was made by Goetze and Gwynn, and painted and decorated by Fleur Kelly assisted by Lois Raine.

At Ranworth Church in Norfolk, there is a late medieval lectern with a book desk on each side. One desk is much lower than the other, suggesting that each side was intended for a different function. One possibility is that the lower side was used for the organ player seated at the keyboard, the other for one or more singers standing around a large book. Goetze and Gwynn made such a double-sided lectern loosely based on the Ranworth model.

By the late fifteenth century more parish churches were being provided with pews and/or benches for the people, but they were not ubiquitous. We needed some furniture in the chancel at St Teilo’s Church for the clergy and singers. In addition to the large seat already made for the church and a pair of low stools, Jeremy Glenn made two short benches, and two further pairs of stools of different heights, which were used adaptably for sitting, kneeling, and placing books and ritual objects, as is suggested by late medieval iconography.

The passing of the Peace (pax) during the Mass was an important ritual, often undertaken by each person present kissing a wooden board or metal plaque decorated with a sacred image. A pax board surviving at St Andrew’s Church, Sandon, Essex, provided the model for the new board made for the project. Five different craftspeople were involved in making and decorating it.

Central to the Mass was the consecration of the bread as the Body of Christ (Corpus Christi). The people rarely partook of the bread at Mass, but one piece at least (known as the Host) was kept in church both as a focus for devotion and for emergencies to administer the rite of Communion when a person was dying. An elaborate late medieval example still hangs in Dennington Church, Suffolk; but this simple wooden pyx with lock is based on a photograph, the only evidence of what is thought to be a late medieval hanging pyx destroyed in the bombing of St Peter’s Church in Bristol in 1940.

A decorated cloth to hang over the pyx survives from Hessett Church in Suffolk (but now kept in the British Museum). Though using modern damask rather than the translucent lace material of the original, this pyx cloth follows the dimensions and decoration (fringe and tassles) of the Hessett cloth. It was made by the firm of Mary Collings to our specification.

A container is required to keep the bread which is to be consecrated at the Mass. There are a number of surviving metal pyxes. However, these seemed too rich for a small parish church of modest means. This wooden pyx was made to complement the wooden hanging pyx, and derived from the same Bristol exemplar.

St Teilo’s Church already possessed a thurible (to burn incense at the Mass and other rituals) based on a surviving Welsh example; but there was no incense boat. Surviving incense boats are generally of precious metal, and shaped like a long thin boat. We could not afford to commission such an object, and we thought that a church like St Teilo’s might have compromised with a turned wooden incense boat and spoon, using the round-ended Welsh coracle for its shape, such as this one devised and made by Phil Neal.

Cruets are needed to hold the water and wine to be poured into the chalice at Mass (and for the washing of hands and sacred vessels). Often these are made of glass or precious metal; but a pottery cruet was found buried in the medieval piscina in the church at Eglwys Cymun in Carmarthenshire. Copies were made by John Hudson for the project.

In the late Middle Ages there would have been a piscina in the sanctuary to drain away the water when the priest or other minister ritually washed his hands. The drains of the piscinas at St Teilo’s Church are blocked, and none survives at Salisbury Cathedral. John Hudson made a pottery bowl based on the pattern of the cruet from Eglwys Cymun.

Lamps hung before altars and to signal the presence of the consecrated Host in the pyx in the Middle Ages (as in some churches still today). This pottery lamp and its chain are based on medieval examples dug up in the City of London. John Hudson made the lamp, and the blacksmith at St Fagans Museum made the chain.

A pail is required to hold the blessed water used each Sunday for the ritual cleansing of the high altar and all present before Mass, and for the ritual purification of the altars in the church during the procession which follows. This pail was made by Phil Neal, dimensions and design derived from Continental medieval examples (no suitable British model being available).

Although a late medieval inscription for the Jesus Mass was found behind the south aisle altar of St Teilo’s Church, it has not yet been recreated. This painted panel served in its stead, based on a typical late medieval theme – the five wounds of Jesus on the Cross – and principally based on a carved panel originally from the house of Cardinal David Beaton, Archbishop of St Andrews from 1539 to 1546.

The soul of the medieval dead passed on to Purgatory, but their body remained in the parish – either below the floor of the church or in the churchyard. In church, where a patron was often buried before an altar which they had endowed, the location might be marked by a floor brass above the burial place. As part of engaging with the experience of the presence of and prayer for the dead, this brass of a notional patron of the Jesus Mass (Sir Thomas ap Rhys) was made by Phil Neal, using the model of the brass figure in Baldock Church, Hertfordshire, possibly of William Crane (d. 1480).

Few vestments survive in Britain from before the Reformation, and those that do have often been altered or made into something else. Late medieval memorial brasses of priests often show them in full vestments. These provided the models for a full set of white (gold) vestments – chasuble, dalmatic, tunicle and cope – and a red chasuble made by Mary White at Salisbury, with Canon Jeremy Davies as adviser. Mary White also made two matching burses (to hold the linen cloths set out on the altar at Mass) following the dimensions of surviving late medieval examples now in the Victoria and Albert Museum, London.

There are also images of other fabrics, liturgical books, and other artefacts & hangings.